Home | About FOSF | Our Current Schedule | Our Memorial Bench | FAQ | Contact Us
Our Book "Sherbrooke Forest: its flora and history" | The Forest and its Inhabitants | Waterways of Sherbrooke Forest
Weeding Methods | The Enemy (Weeds) | Battling Cestrum | Pest Animals | Indigenous Vegetation | Fungi
Inigenous Fauna | Survey Method | Related Links | Acknowledgements
In the NW sector of the map above, Swamp Creek joins Sherbrooke Creek (D 4) at an elevation of about 440m. Swamp Ck is fed by Mick's Creek, a small rivulet fed in turn by a spring arising opposite the entrance to Burnham Beeches at 460m. A little further south (D 6), Adele Gully runs south west into Sherbrooke Ck at 365m. Below the junction of Sherbrooke and Clematis Cks (F 8), Pound Creek joins Clematis Ck at about 275m.

At H4, Hardy Creek arises at 395m, runs at first in a SE direction, and is joined after about 400m by Don's Creek from the north and Freshwater Creek from the east (H 5). It then runs south for about a kilometre to join Monbulk Creek at an elevation of about 250m. (J 10). Just north of the junction, Paddy Creek, which is about 600m long, runs into it from the NE.

Monbulk Creek continues west and flows under the Trestle Bridge in Selby. A few metres further to the west, and now in Belgrave, it is joined by Clematis Creek outside the forest before turning south again to Belgrave which is approximately 200m above sea level.

SUMMARISED CREEK SOURCES & ELEVATIONS
Note : Slip Creek and Tip Creek may be found on the comprehensive map at the end of this page


THE UNWANTED TRIBUTARIES -- ROAD DRAINS
Rainfall at the north end of the forest used to be considerable at about 1100mma year,although today, in 2008, it is closer to 1000mm. Excess water necessarily finds its way to lower levels via drains or creeks.

Since the park is surrounded by roads and residential blocks, and because many of the latter are unsewered, we have:

Creek beds generally feature one or more of the following "ingredients" :
Click below images to see a larger verion:

Because of the fairly high annual rainfall - about 1100mm - the creek banks are in general colonised by both ground ferns and tree ferns, as well as Sassafras, and occasionally Ti-tree. As you'd expect, they are mostly heavily shaded, and also cool and moist, so that weeds can't easily grow. But if the ground has been disturbed, and the canopy removed, and particularly if there are houses nearby, we get lush weed growth, which can overgrow the creek.

The nature and number of creek fauna depend on many factors such as rainfall and water flow, physical and chemical composition, inputs from neighbouring roads and houses, nature of the creek banks and beds.
Between 2003 and 2013, five FOSF members undertook monitoring two locations: one on Hardy Creek near the junction with Monbulk Creek, the other in Monbulk Creek under the Trestle Bridge.

On the physical/chemical level we check temperature, pH, conductivity, turbidity, phosphate level and dissolved oxygen.  At the biological level we look for amphipods, mayflies, shrimp, caddis flies, stoneflies and whatever else turns up!

The presence or absence of these animals is a good indicator of the creek's health.   The larger fauna include the water rat and platypus. These are shy animals and are rarely seen.  Platypus have been sighted at the Swamp Creek dam, Clematis dam and in Monbulk Creek upstream of the Trestle Bridge.  In addition, lyrebirds use the creeks quite extensively.


There are seven wooden bridges, one fabricated in concrete and two culverts (not shown)
which act as bridges:


SHERBROOKE FALLS
In the late 1850s, the falls were named Graham`s Falls after RW Graham who cut the first track into this scenic point and who also guided tourists into the area (as well as managing the local Post Office in Sherbrooke Road). In the 1920s the area featured a splendid log kiosk and picnic tables with attached benches. Later, in the 1970s a steel framed wooden shelter and a brick toilet were added. There were also some very large Mountain Ash, one with a 6m girth judging by the stump which remains at the site. Unfortunately vandals attacked the amenities and the trees in the late `70s with the result that the picnic ground had to be cleared in the `80s.


(Click the image below to see a larger version). 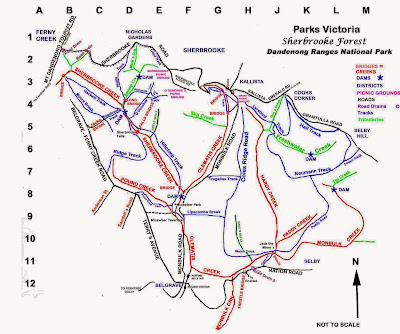